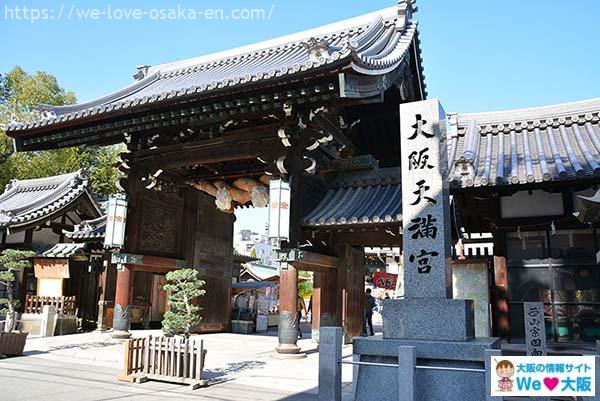 If you ask most people in Osaka, “Which shrine is the best in Osaka?” Most of them will tell you Osaka Tenmangu Shrine in Tenjinbashi, also commonly known as Tenjin-san by locals.

It is a representative shrine of Osaka and enshrines Sugawara Michizane, known as the god of learning.

Osaka Tenmangu Shrine’s origins date back to the Nara period (710-794). It is said that in 650, the first year of the Nara Period (Shiraki 1), Emperor Koutoku enshrined the Daishogun Shrine here as a deity to protect the northwest of the capital. In the Heian period (794-1185), on his way to Dazaifu, Sugawara no Michizane paid a visit to the Daishogun Shrine. However, Michizane died in Dazaifu.

Fifty years later, in the 3rd year of the Tenryaku era (949), seven pine trees grew overnight in front of the Daishogun Shrine, and the tips and branches of the trees glowed at night. Hearing this, Emperor Murakami built a shrine here and enshrined the spirit of Michizane.
Since then, more than a thousand years have passed! Osaka Tenmangu Shrine has been passed down through the generations. 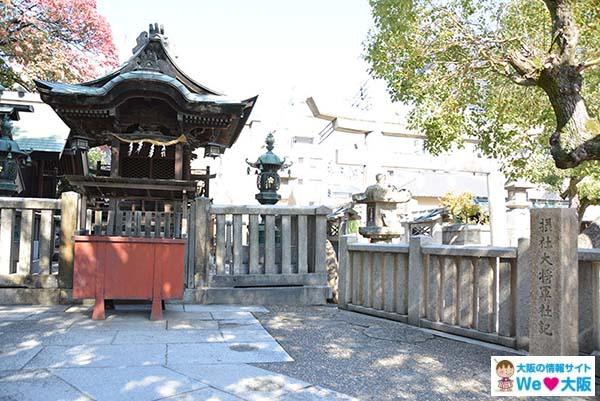 The Taishogun Shrine still enshrines a deity closely related to Osaka Tenmangu Shrine in a section of the shrine grounds.

Osaka Tenmangu Shrine is also a place for hatsumode, prayers for success in school, visits to the shrine, Shichi-Go-San (seven-five-three-three) ceremonies, weddings, and more. 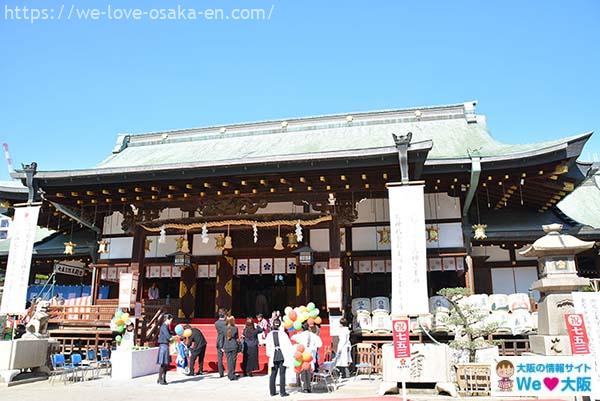 It was November when the photo was taken, and many families were visiting to celebrate their children’s growth during the Shichi-Go-San Festival.

The Plum Blossom Hall is a memorial structure for the Grand Festival held in 1025, and was built in the Heian period (794-1185), using materials from the Ise Jingu Shrine. It was designated as a National Registered Cultural Property in July 1999. It is the stage for Shinto ceremonies that carry on the traditions of Japan. You will be enveloped in a dignified atmosphere. 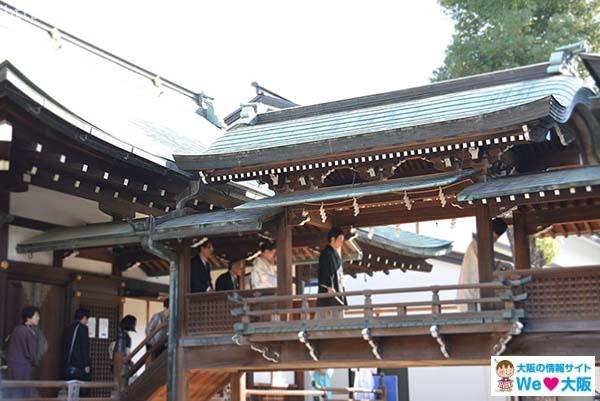 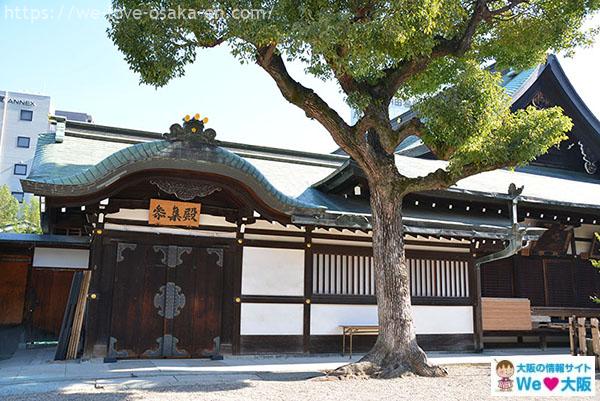 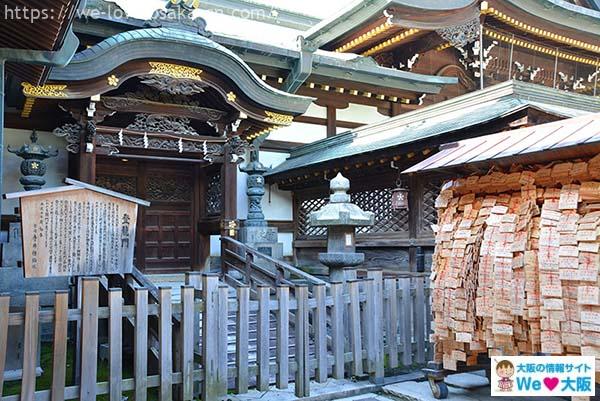 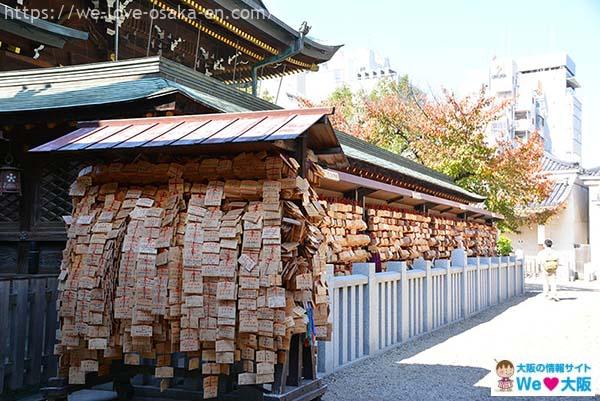 During exam season, many students visit the shrine to pray for success. Next to the ema (votive picture tablet) is the Toryu Gate, and during the Hatsutenjin Umehana Matsuri (Plum Blossom Festival) in January, people gather to pray for students to pass through the gate and pass ther difficult entrance examinations. This gate is based on a Chinese legend that carp and other animals gather under a waterfall in the upper reaches of the Yellow River, and that most of them cannot climb the waterfall, but if they could, they would become dragons. It is said that if one passes through this gate, he or she will surely rise in the world. 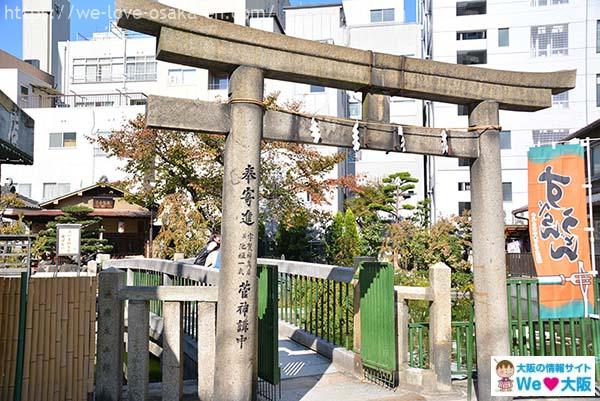 Further northeast from the Hanjo-tei is Hoshiai Pond, commonly known as Turtle Pond. On the banks of the pond is the Ancestral Shrine, which enshrines the ancestral spirits of the shrine’s family members and Ujiko worshippers. When early spring arrives, the plum grove planted around the pond is in full bloom in bright pink. 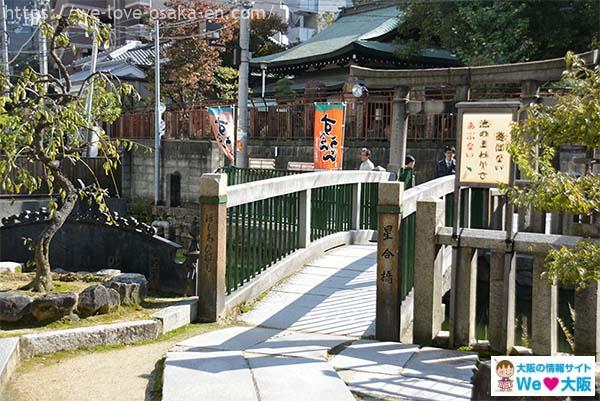 The Hoshiai Bridge over the pond is called Aichibashi, and people say that a man and a woman who meet on this bridge will be married. This legend originates from the fact that in the olden days, matchmaking took place here. An event called the Hoshiai Tanabata Festival is held every year on July 7, Tanabata Day. Who knows, you may even meet someone you like!

Another Prayer For Success 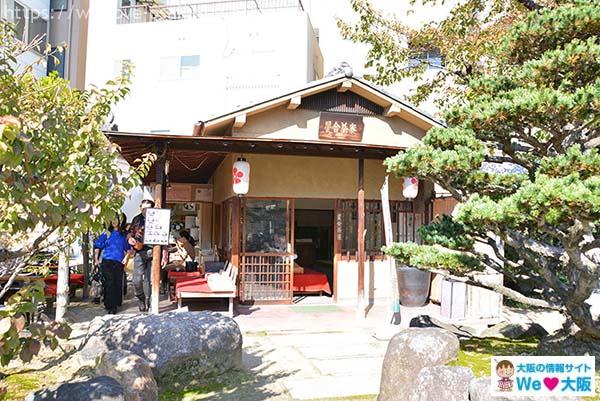 Crossing the Hoshiai Bridge, you will find Soujyu, a restaurant that serves “suberan udon,” a must for those praying for success in their entrance exams. 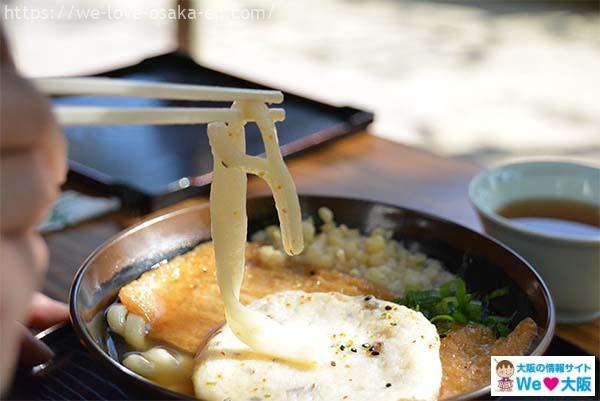 The udon here is a little thicker than usual, and there are cuts in between these noodles! Even if you lift up the noodles, they don’t slide off your chopsticks. The noodles here are made from a special kind of flour, so they don’t break through the slits and are very chewy. The recommended menu item, Tenjin Gitsune Udon, is 400 yen. 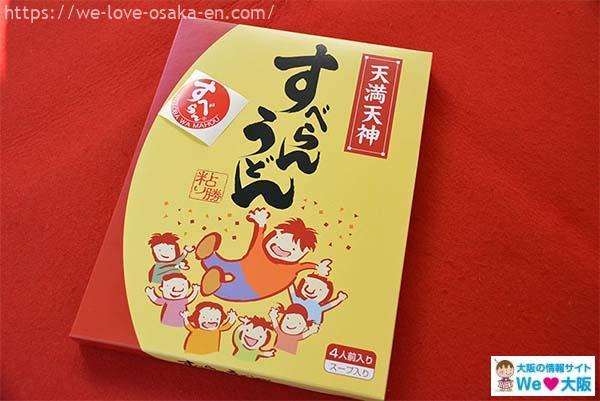 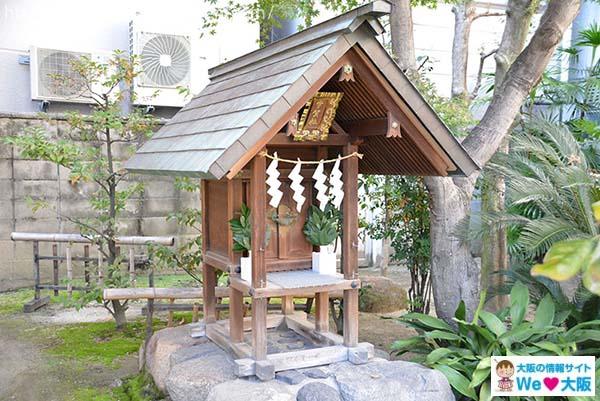 There is also a god enshrined right next to the souvenir store to pray for success, so let’s pay our respects here as well. It seems to be a god for women. 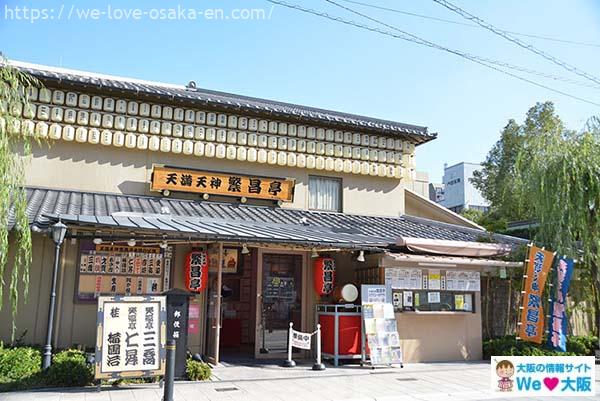 If you walk through Osaka Tenmangu Shrine to the north, you will find a place crowded with people. The Kamigata Rakugo theater Tenma Tenjin Hanjotei was revived after a 60-year absence, and has been drawing large crowds since its re-opening in 2006. Rakugo performers from the Kamigata Rakugo Kyokai perform daily, so why not stop by after visiting the temple? 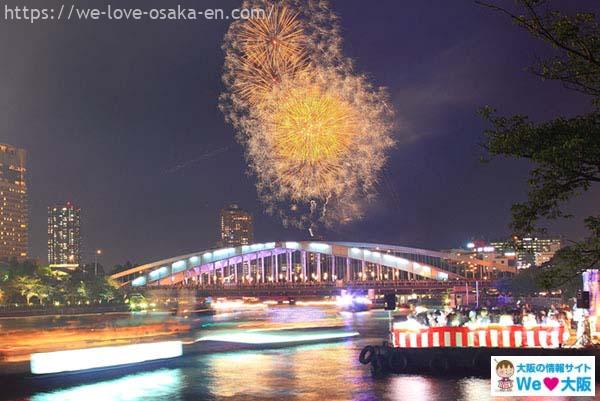 Last but not least is the Tenjin Festival at Osaka Tenmangu Shrine, a summer tradition in Osaka. Along with the Kanda Festival in Tokyo and the Gion Festival in Kyoto, it is one of the three major festivals held in Japan. Every year, Yoimiya and Hongu are held on July 24 and July 25, respectively, and attract about 130,000,000 visitors. The festival attracts about 130,000 people. The origin of Tenjin Matsuri is said to be as old as the Tenryaku 5 (951), the year after Osaka Temmangu Shrine was founded. In this ritual, parade floats are floated down the Okawa River, and the place where they drift ashore is used as the site for that year’s Otabisho.

The final part of the main shrine is a dedication fireworks display.

After the boat procession begins and night falls, fireworks are launched in dedication to the gods. A total of 3,000 fireworks are launched from two locations across the Okawa River. The sight of the boat procession sailing along the Okawa River, the fireworks display, and the view from the riverside seems to lead us into a fantasy world. To everyone in Japan and all over the world, Osaka’s festival is the best!

On July 23, the day before Yoimiya, the mikoshi is paraded through the Tenjinbashisuji Shopping Arcade and enters Osaka Tenmangu Shrine, with women selected from among the general applicants cheerfully carrying the mikoshi, which weighs approximately 200 kg. It makes the Tenjin Festival more colorful.

Osaka’s beppin (beautiful girls) Tenjin Matsuri Girls’ Mikoshi. See for yourself the carefully selected Osaka’s beppin. You will be enchanted!

It is no exaggeration to say that Tenjin Matsuri is the festival that represents Osaka, the city of water. With the support of many people, this festival has gone through twists and turns in its history and has continued to this day together with Osaka Temmangu Shrine. We hope you will experience Osaka through the festival and its history! 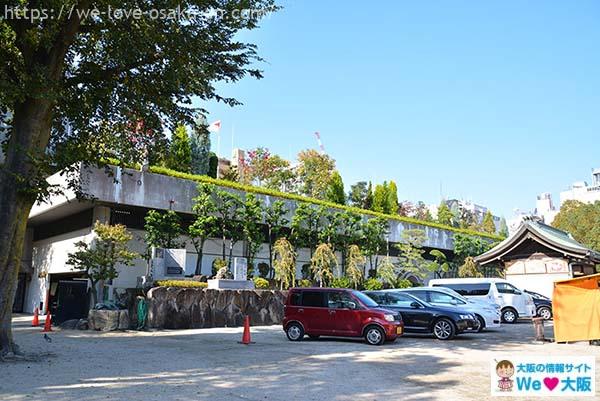 Those coming by car are also welcome. There is a parking lot inside Osaka Temmangu Shrine. 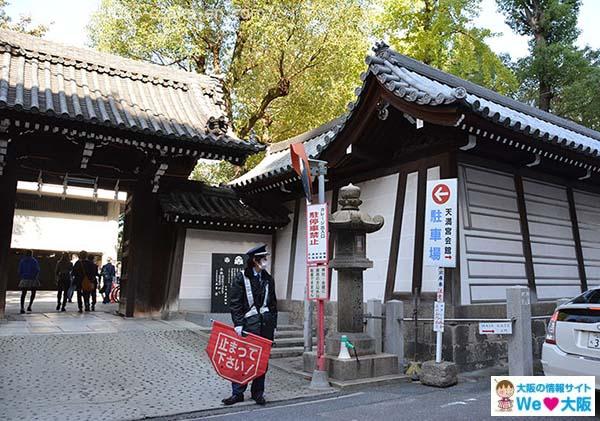 Above is the entrance of the parking lot beside the main gate of Osaka Tenmangu Shrine. 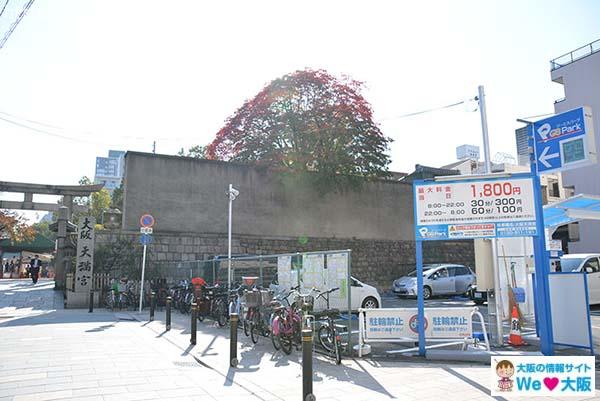