The life of Sen no Rikyu, the tea master from Sakai 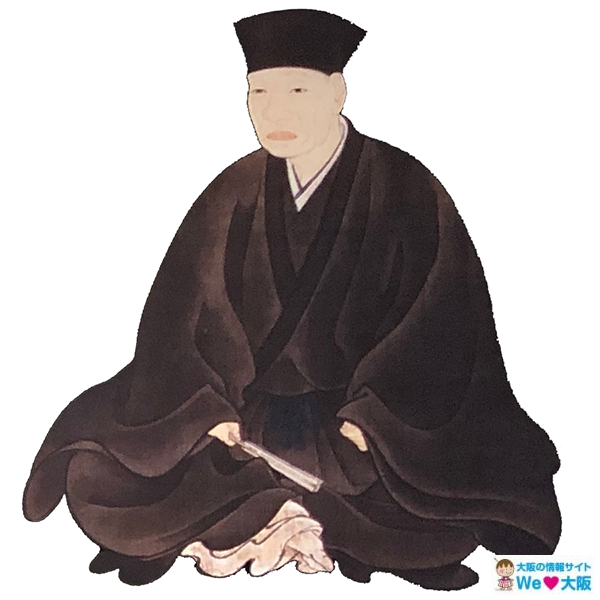 Sen no Rikyu was born in Sakai, Osaka, in 1522, the year the Spanish Armada completed its circumnavigation of the world. He served Oda Nobunaga and Toyotomi Hideyoshi, and became the founder of the Sado-Senke school of tea ceremony, but in his final days Hideyoshi ordered him to commit seppuku (ritual suicide).

How did Sen no Rikyu, whose family was a fish wholesaler and a member of the ruling class of the free city of Sakai become a master of the tea ceremony? Why did Sen no Rikyu, who was given a stipend of 3,000 koku by Nobunaga and trusted by Hideyoshi, have to commit seppuku? We walked around Sakai, Sen no Rikyu’s birthplace, to find out more about his life.

At the time Sen no Rikyu was born, Sakai had a thriving trade with China, Europe, and Southeast Asia. It was also a city that resembled a city-state, with influential merchants establishing an autonomous organization to conduct their own politics. In Sakai, which prospered from the trade with the southern barbarians, there was a popular custom of enjoying the elegance of sankyo. This term means to enjoy the atmosphere of a mountain village without having to leave the city. The wealthy merchants built tea rooms in the backyards of their houses and planted trees around them, where they enjoyed tea ceremonies and gatherings.

At first, Rikyu is said to have learned tea from Kitamuki Dochin, a master of shoin-style tea ceremonies. Later, when Rikyu was 17 years old, he became an apprentice to Takeno Joo, a wealthy merchant and master of the tea ceremony in Sakai. The Ruins of Takeno Joo Residence, which remains in Sakai, is now a small garage, but one episode from Rikyu’s apprenticeship is introduced on a signboard that reads, “Rikyu was a tea master when he was 17.” 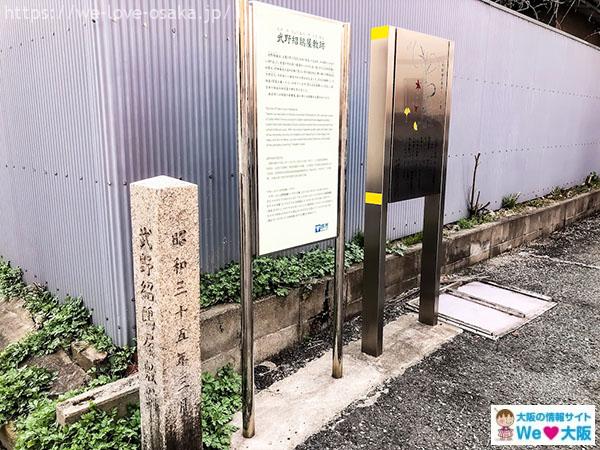 One day, Master Joo, wishing to test Rikyu’s wisdom, told him to go sweep the garden. When Rikyu went out to the garden, he found that it had already been swept clean with a broom, and not a leaf or a speck of dust had fallen. Rikyu remained standing for a few moments, but soon an idea came to him and he started to shake some of the trees. As he did so, some leaves fluttered down and scattered here and there, beautifully decorating the ground. Shao’o was said to have liked this elegant spirit and taught Rikyu the inner workings of the tea ceremony. Thus, under the tutelage of Sakai’s talented people, Rikyu deepened Wabicha (rustic simplicity) against the backdrop of the “city-in-the-mountain” mentality.

Oda Nobunaga, who moved to Sakai with the goal of unifying the country, collected funds for his army called yasen (arrow money) from Sakai and used the city as a source of guns. He also practiced “ochayu goseido,” a system of using the tea ceremony for political purposes. After Nobunaga’s death, Toyotomi Hideyoshi began to make wider use of the economic and political benefits of the tea ceremony.

Against this political backdrop, Rikyu designed new tea houses and tea bowls that had never been seen before. He also continued his exploration of Wabicha, including the use of tea utensils based on his own unique perspective. In this way, Rikyu gained authority and fame beyond his position as a tea master.

Rikyu’s position at the time was that of a “close confidant” of Hideyoshi, even though he was a merchant. This is evidenced by the fact that when Otomo Sorin, a feudal lord of warring states, visited Hideyoshi. Hidenaga (Hideyoshi’s younger brother) said, “Master Rikyu handles secret affairs and Hidenaga deals with official affairs. We should finally have a talk,” (from “Otomo Family Archives”). If Rikyu was so intimately trusted by Hideyoshi, why was he ordered by Hideyoshi to commit seppuku?

Wabi, the worldview pursued by Rikyu

Rikyu left various anecdotes, the most famous of which is probably the story of morning glories. Word spread that morning glories were blooming beautifully in Rikyu’s garden. Hearing this story, Hideyoshi went to the morning tea ceremony, saying “Let’s go see them then,” but not even a single morning glory was blooming in the garden.

Hideyoshi went up to the tatami room in a foul mood, only to find a single brightly colored morning glory on the floor. Hideyoshi and those who were with him felt as if their eyes had been awakened, and Rikyu was greatly praised.

This is a story in the “Chawa Shigetsushu” (Tea Talks and Moonlight Collection), written by Fujimura Yoken, a direct disciple and one of the “Four Heavenly Kings of Sotan,” based on what he heard from Sen no Sotan, Rikyu’s grandson. 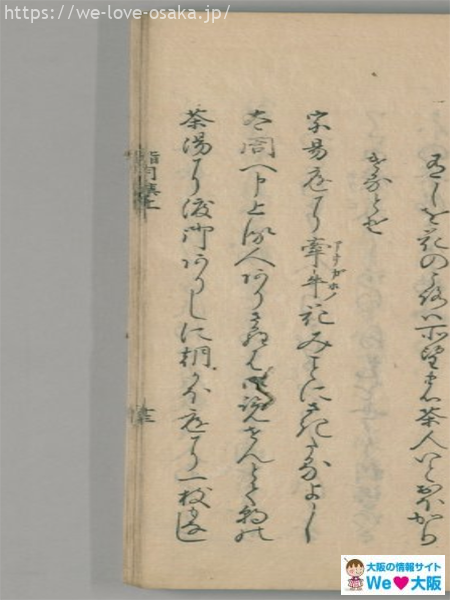 I believe that Rikyu’s wabi worldview, in which beauty is quietly enjoyed in a simple space without decoration or pomp, is what he pursued, and that his hospitality to his guests was to allow them to feel at peace while enjoying such beauty.

The Sen no Rikyu Residence Ruins is located in Shukuin-cho, in the center of Sakai. 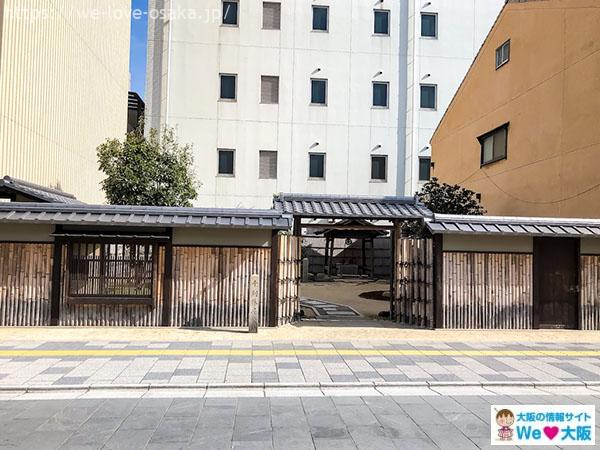 Only a part of the mansion remains today, and it is said to have been about ten times as large as this one. The well in the back of the house has remained since Rikyu’s time, and it is said that camellia charcoal was submerged in the bottom of the well. Here, a Sakai sightseeing volunteer guide was on hand to tell us about the situation at the time and the events leading up to Rikyu’s seppuku. 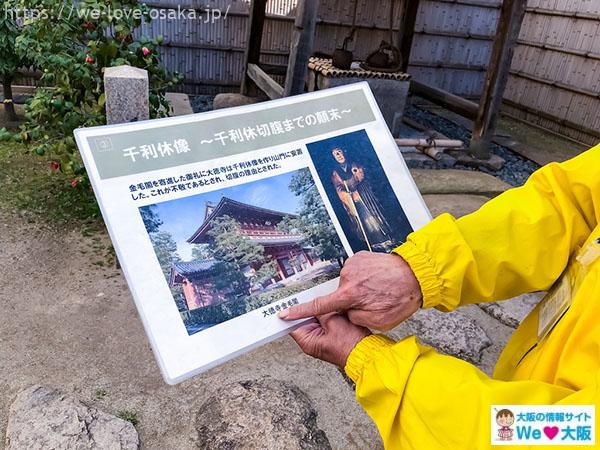 One of Rikyu’s close friends was a monk named Kokei of Daitokuji Temple in Kyoto. They discussed everything, confided in each other, and had nothing to hide from each other.

In 1589, on the 50th anniversary of his father’s death, Rikyu used his personal funds to renovate the Daitokuji Kinmokaku from a single-story to a two-story structure. In gratitude, Daitokuji made a statue of Sen no Rikyu and enshrined it in the temple to convey Rikyu’s achievements to future generations.

Two years later, in 1591, Hideyoshi found out about this, and said, “The place is frequented by the Emperor and other nobles! How insolent of Rikyu! How rude and ill-mannered! He was so angry that he ordered the priest to commit seppuku (ritual suicide). It is said that Rikyu was ordered to commit seppuku for a different reason.

For example, Rikyu became isolated after Hidenaga, who had been his greatest ally, died of illness. Many people felt that Rikyu, who was not a samurai, was not authoritative enough to give his opinion to Hideyoshi. It is said that Hideyoshi, while he was away from Kyoto fighting against Odawara, invited Tokugawa Ieyasu to a tea ceremony and used it as an excuse to urge Hideyoshi to order Rikyu to commit seppuku, claiming that Rikyu was plotting against him.

After that, Gin committed suicide, and there were rumors like this. The real reason why Hideyoshi ordered Rikyu to commit seppuku is not known, but the charges against Rikyu announced by the authorities were probably not very credible to the people of that time.

Before he was ordered to commit seppuku, Rikyu composed a kyoka, a type of tanka poem, on his way down to Sakai from Kyoto, where he was living at the time.

Rikyu’s poem is a kind of tanka poem, and the meaning of the poem is Rikyu is a good person, but he is not a good person. Did he compare himself with Sugawara Michizane, who was moved to the left and died due to falsehoods and slander caused by jealousy?

Whatever the reason, it is true that Rikyu’s consistent attitude and pursuit of Wabicha not only made the tea ceremony what it is today, but also gave birth to and spread the spirit of “hospitality” and the enjoyment of the uniquely Japanese taste. For those of us who are busy and pressed for time today, perhaps enjoying a “mountain house in the city” is a luxurious way to spend our time. However, sometimes it is also good to get away from the hustle and bustle of the city, and to feel the wabi sabi of the space in a peaceful way.

Sakai Plaza of Rikyu and Akiko

You can learn more about Rikyu and how the tea ceremony culture was created in Sakai, which prospered through trade with the South, at the Sakai Risho no Mori, located next to the Sen no Rikyu Residence Site. 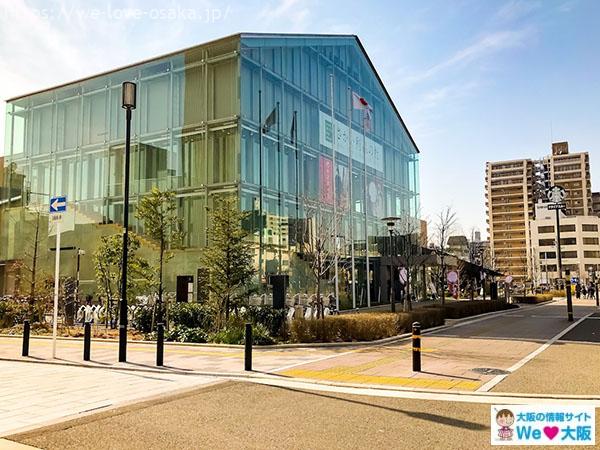 In addition to exhibits on Sen no Rikyu, visitors can experience the tea ceremony in an authentic tea room and taste powdered green tea and sweets prepared by the three tea ceremony families (Omotesenke, Urasenke, and Mushanokouji Senke).

Name: Sakai Plaza of Rikyu and Akiko
Address: 2-1-1, Shukuincho-nishi, Sakai-ku, Sakai-shi
Access: 10 minutes walk from Sakai Station on the Nankai Main Line, 1 minute walk from Shukuin Station on the Hankai Line
Parking lot: 200 yen per hour * A certain discount service is available for facility users
Business hours: 9:00 to 18:00 * Tea Ceremony Experience Facility is from 10:00 to 17:00
Closed days: 3rd Tuesday (the next day if it is a national holiday) and New Year holidays

Otsuruko
I was born in Osaka and grew up in Sakai. I will offer the history and sightseeing spots of Osaka and Sakai.
Writer