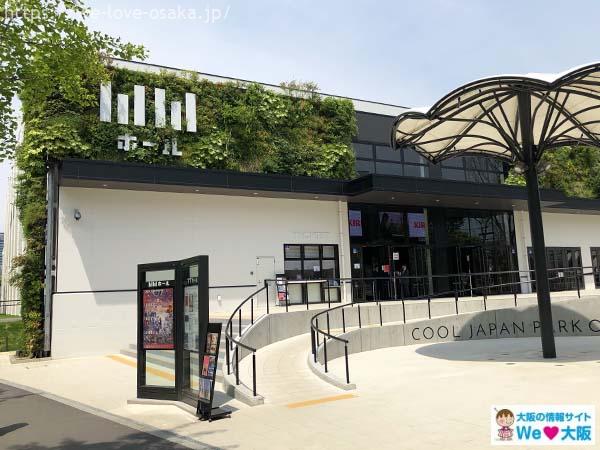 On February 23, 2019, a theater culture attraction facility called Cool Japan Park Osaka opened. Osaka Castle is one of Osaka’s biggest tourist attractions, attracting increasing numbers of visitors every year from across Japan and overseas  And when it comes to entertainment in Osaka, comedy is what it is all about. Therefore, in February 2019, private companies including Yoshimoto Kogyo and a public-private fund have come together to create a new attraction facility at Osaka Castle to promote Osaka as an interesting city.

What kind of theater is Cool Japan Park Osaka? Let us introduce it in detail.

1. Amazing gathering at the opening ceremony

Cool Japan Park Osaka’s opening ceremony was on February 23, 2019. Sanma Akashiya appeared to perform in “Hana no Jizai-san,” which was broadcast from 1976-1986 and was taken over by Sanma Akashiya from master Bunshi Katsura, and will be revived with Takashi Okamura of Ninety-Nine.

After the performance, the M-1 Tour Special 2019 in Osaka took place. But it didn’t stop with comedy: in March 2019, there was a Celebration Noh featuring Mansai Nomura. There were also plays, musicals, and live music. The theater has become a very wide-ranging cultural facility with  traditional performing arts as well.

2. How to read it? Sanma Akashiya is the godfather

Cool Japan Park Osaka has three theaters: WW Hall, TT Hall, and SS Hall. The godfather of the halls is Mr. Sanma Akashiya, but how should I read it?

WW means “excitement” and to “laugh and laugh.” TT and SS mean that he wants everyone to play with the halls, naming them freely in their own words, imagining what they stand for. As expected of Mr. Sanma, he has a playful spirit.

WW Hall of “Excitement” and “Laugh and Laugh” seats 1,138 plus 6 wheelchairs. From the picture, it’s hard to see the logo says WW. There is also a projection mapping video presentation. 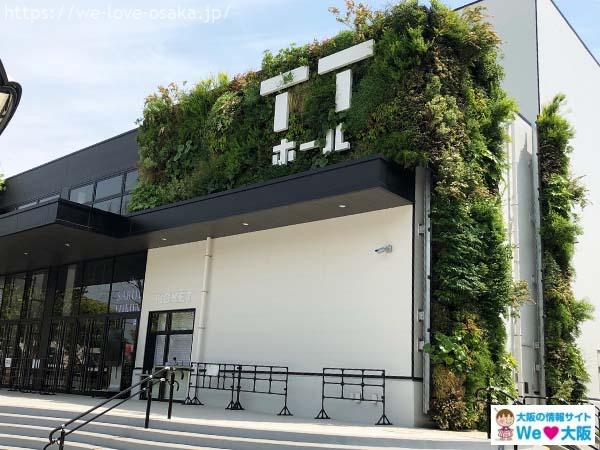 The TT Hall seats 702 and 4 wheelchairs. This is a medium-sized hall where plays, musicals, and traditional Kamigata performing arts are held. This hall also has a projection mapping video performance. 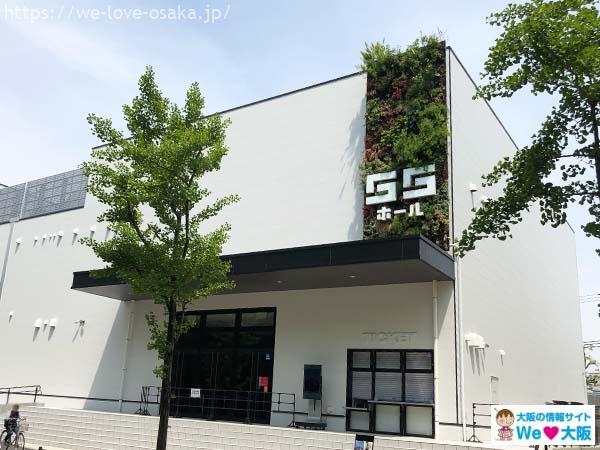 SS Hall can seat up to 300 people in chairs and 400-500 people standing. The SS Hall, where live music concerts are also held, is 4K broadcast-capable and can also be used for studio recordings of live programs.

4. Nearby Facilities and Directions from the Station 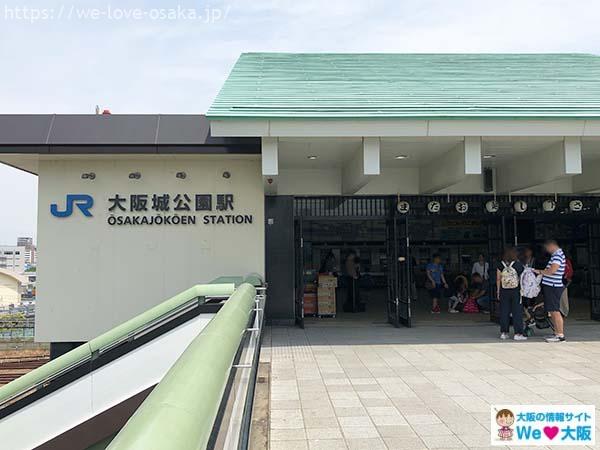 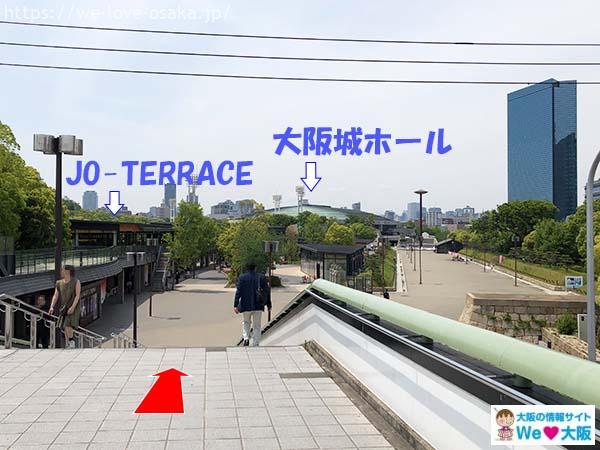 There is only one ticket gate at JR Osaka-jo Koen Station, so even first-time visitors will not get lost at the exit. After exiting the station, you will see a view like the one in the photo. The facility in front of you is Jo-Terrace Osaka, and in the back is Osaka Castle Hall. On days when top-notch artists hold concerts at Osaka Castle Hall, the area around the station is very crowded. After exiting the station, go down the stairs. 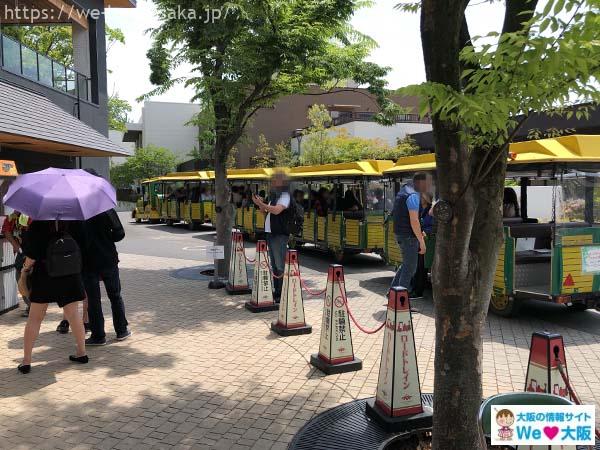 Walk straight through Jo-Terrace Osaka and you will see the road train station on your left. The road train is crowded with families with children, but you can also walk this way. 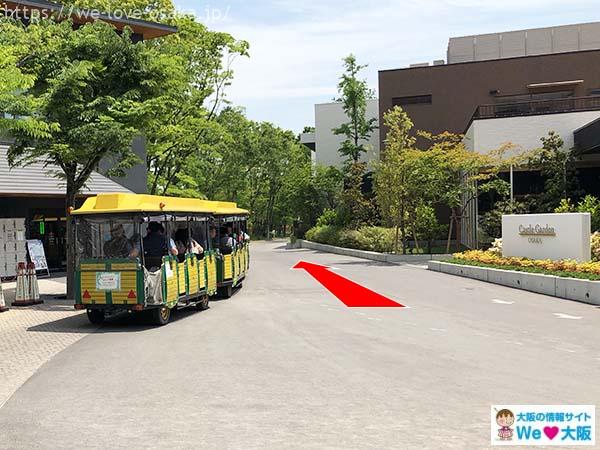 From the road train station, you can reach Cool Japan Park Osaka by walking along this road. However, the scenery is a bit lonely. 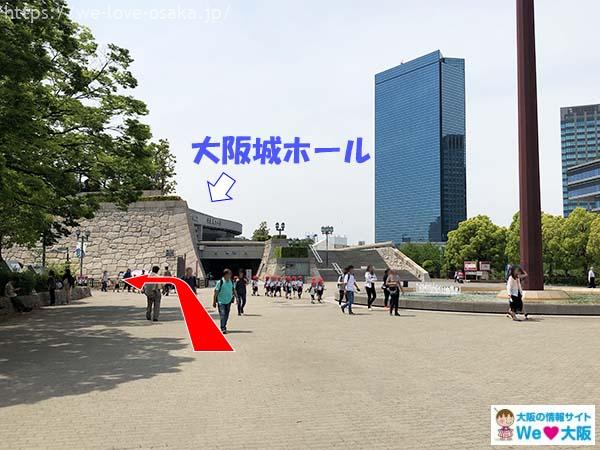 After passing through Jo-Terrace Osaka, you will come to a plaza with a fountain in front of Osaka Castle Hall. Turn left here. 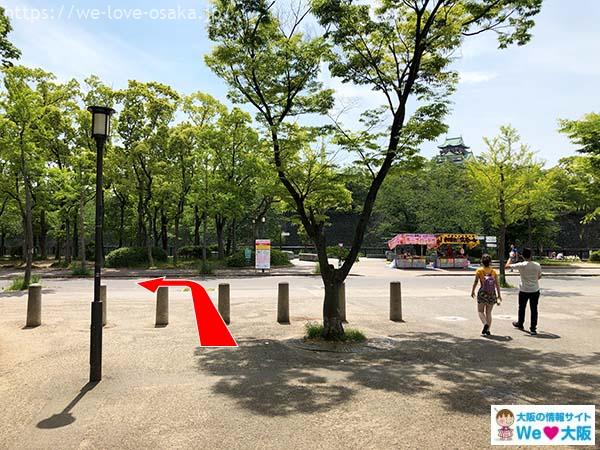 Go straight ahead and you will see Osaka Castle. You will come to a large street. 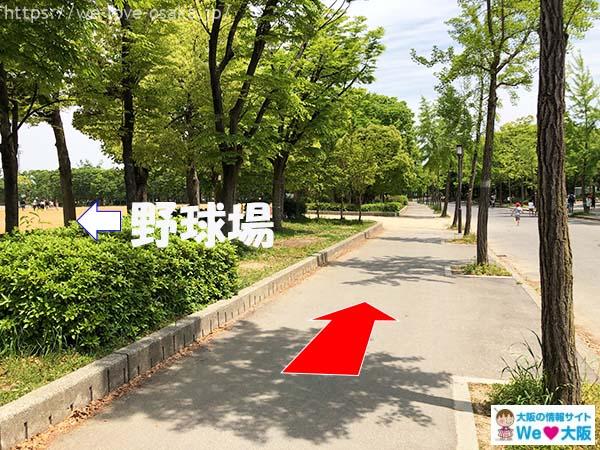 You will walk down this street. On the left side of the street is the Plaza of the Sun with a baseball field, and on the right side is the Forest of Memorial Trees, where people enjoy barbecuing and viewing cherry blossoms in April. Although it is a short distance, it is enjoyable just to walk on a day out.

We walked down the street and arrived in front of WW Hall just as the forest deepens. It is a little hard to find, but the directions are not too complicated.

4-2. The shortest way from Morinomiya Station

If you want to go to Cool Japan Park Osaka by the shortest walking route, we recommend you to go from Morinomiya Station on the JR Loop Line and Osaka Metro Line. There is only one ticket gate, so you will not get lost. 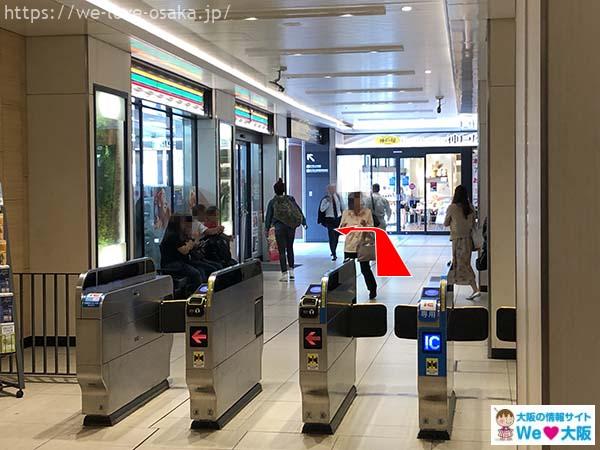 When you exit the ticket gate, there is a 7-Eleven on your left, and then turn left to exit the station. 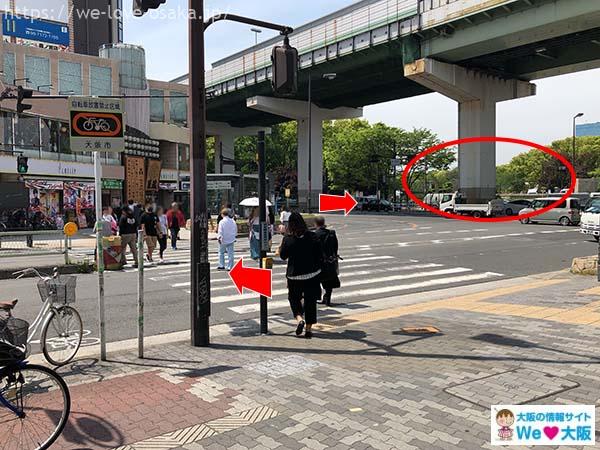 After exiting the station, you will come to a large intersection. Cross this intersection in the opposite direction. Go left and right at the traffic lights, and you will see the entrance to Osaka Castle Park at the red circle. 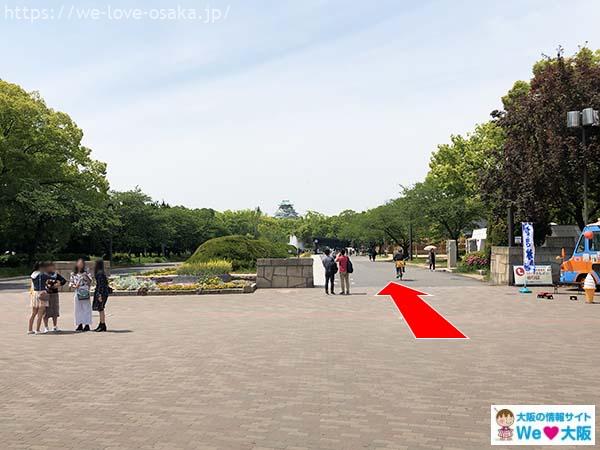 After entering Osaka Castle Park, go straight ahead. After a short while with Osaka Castle in front of you, you will come to a plaza with a fountain surrounded by large rocks. 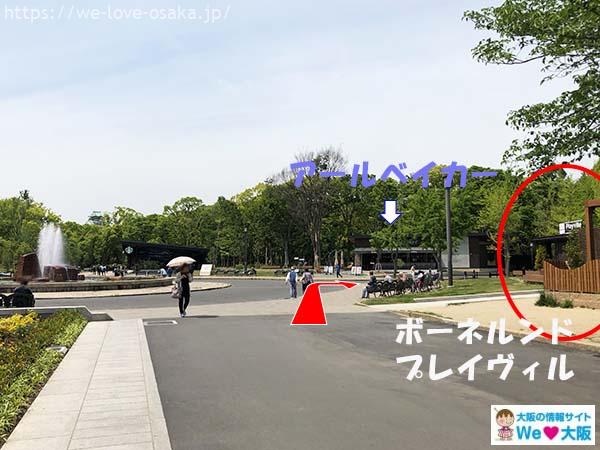 When you come to the fountain surrounded by large rocks, turn right. You will see Playville Bornelund on your right, so turn right here. 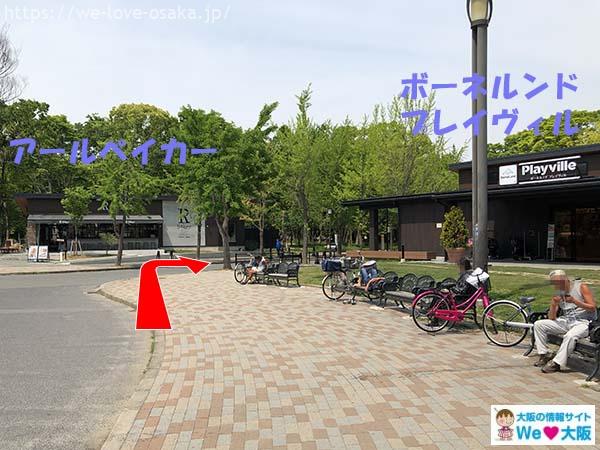 Turn right and this is what you see. On the right is Bornelund, and across the street is a bakery-cafe called Earl Baker, so continue on the path between them. 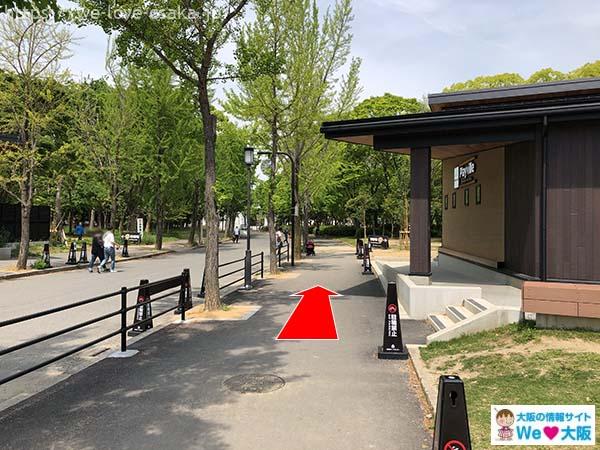 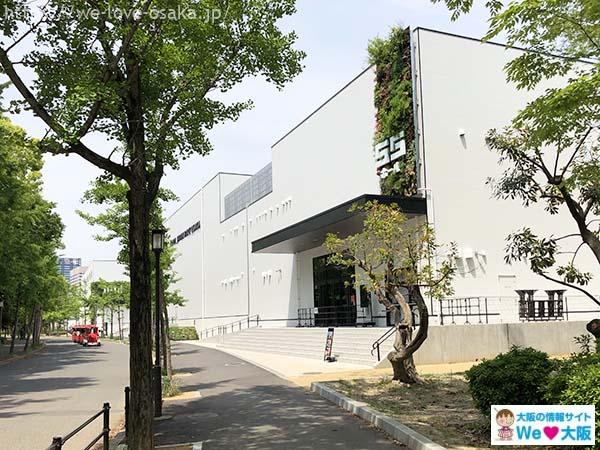 Osaka Castle Park is very large and there are many stations closest to the park. Just getting off at a different station could mean a 20-minute walk. That would be tiring, wouldn’t it? Here we introduce the best way to access the park.

Get off at Keihan Kyobashi Station
↓ 1 minute walk
At JR Kyobashi Station, go around the loop line toward Tennoji
↓ When you leave the Keihan station, you will find JR Kyobashi station in front of you.
↓ 2 minutes fare 120 yen
Get off at JR Osaka Castle Park Station
* Kyobashi → JR Morinomiya Station
3 minutes, fare is 180 yen

To get there by car, take the Morinomiya exit on the Hanshin Expressway Route 13 Higashi-Osaka Line. However, there are many one-way streets aroundOsaka Castle Park, and if you are not familiar with the area, it will be difficult to reach the park. Osaka City has a well-developed subway system, and it is possible to transfer to the JR station. We recommend using the train to get to Osaka Castle Park.

What do you think? Cool Japan Park Osaka offers a wide range of entertainment including comedy, theater, live music, and Kamigata traditional performing arts. The WW Hall and TT Hall both have projection mapping, and SS Hall will broadcast 4K on TV. With its new theater playground, Osaka Castle Park has truly become an entertainment theme park. We hope you will visit soon!

Kururun
This is the mascot character “Kururun”of “we love Osaka “. He likes the local specialty of Osaka “Takoyaki”and “Kui aore taro” Kukurun offer fun and useful information to everyone!
Writer