【Osaka Museum of Housing and Living】There are many hands-on exhibits that allow you to travel back in time to the Edo period. 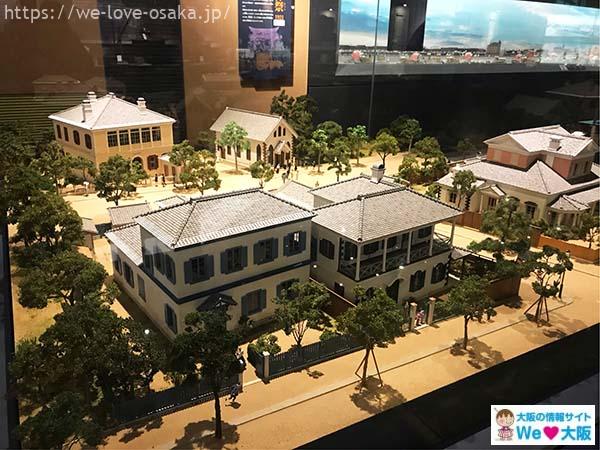 The Osaka Museum of Housing and Living was established in April 2001 at Tenjinbashisuji 6-chome in Osaka as the first museum in Japan to specialize in housing and living in the Meiji, Taisho, and Showa eras from the Edo period.
The state of life at that time is exhibited, and you can also feel the history of Japan. “Tenjin Matsuri” is a typical festival in Osaka. The model reproduced based on the winding picture drawn in 1918 can be seen at that time.
Events are held regularly in the facility, so that can be enjoyed by men and women of all ages. We will thoroughly introduce such “Osaka Museum of Housing and Living”.

1. What is the Osaka Museum of Housing and Living?

In this museum, we can enjoy experience the living in Osaka when it’s 200 years ago.
The streets of Osaka in the Edo period are the actual size. There are exhibition halls where you can experience the lifestyle of those days and living diorama of the Meiji to Showa period with commentary.
That is nostalgic for elderly people and it’s new for youth people. It makes different emotions of each generations.
Follow the route in facility. Start from the entrance on the 8th floor. Go up the long escalator from the 8th floor, and first look at the town of Osaka in the Edo period at the observation floor on the 10th floor. 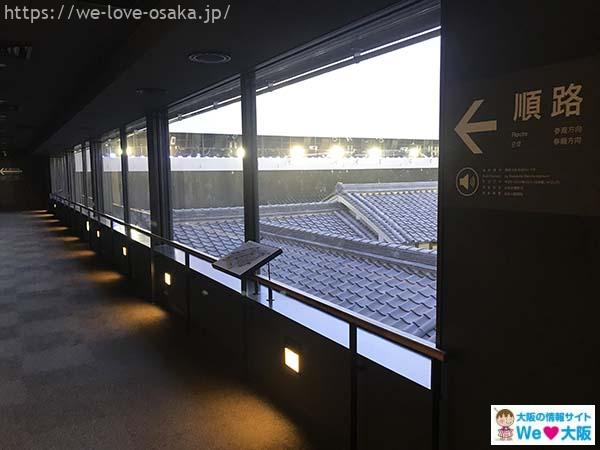 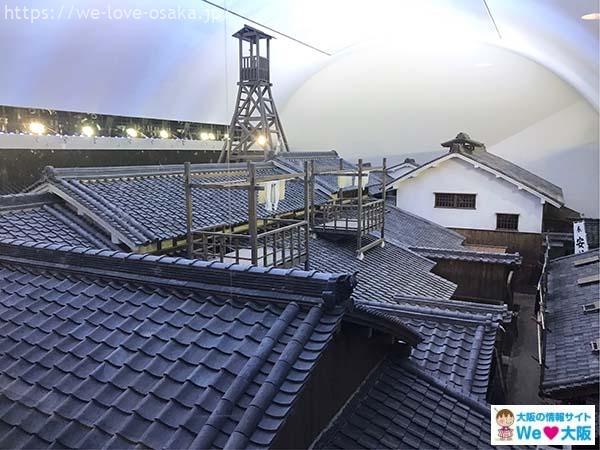 The story of Beichou Katsura, a living national treasure and rakugo storyteller, will explain the history of Osaka at that time.
After looking at it from above, you can go down one floor and walk the actual streets of the Edo period on the “Modern Osaka” floor.

It feels like you have traveled back in time to the Edo period. The townscape at that time has been faithfully reproduced, and you can feel the lifestyle then. 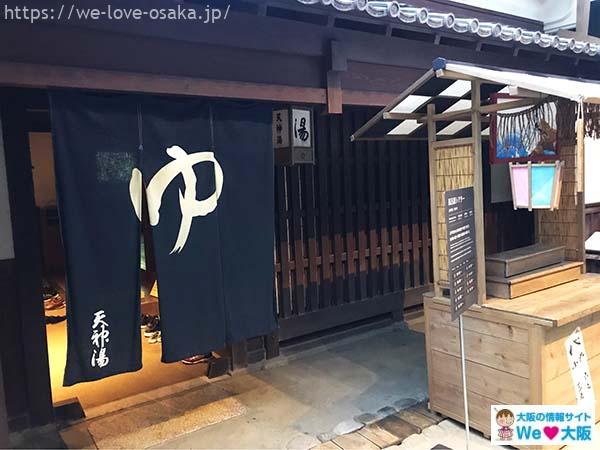 This is “Furoya Theater”. (bathhouse theater) Inside, the bathhouse at that time is reproduced.
Guidance is on the big screen about the lifestyle in Osaka at that time. 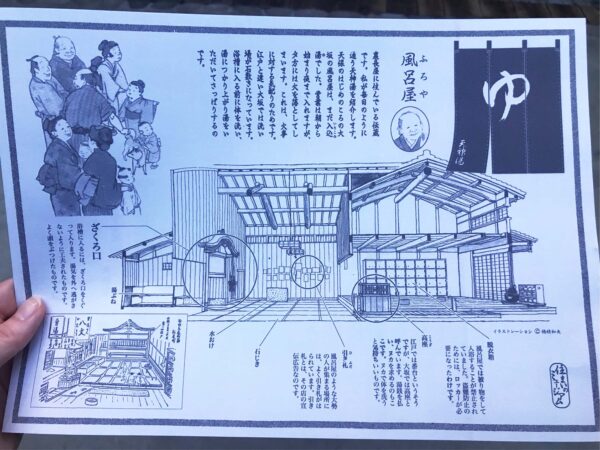 ※Click the photo to enlarge.

The bathhouse at that time is explained detail with illustrations. 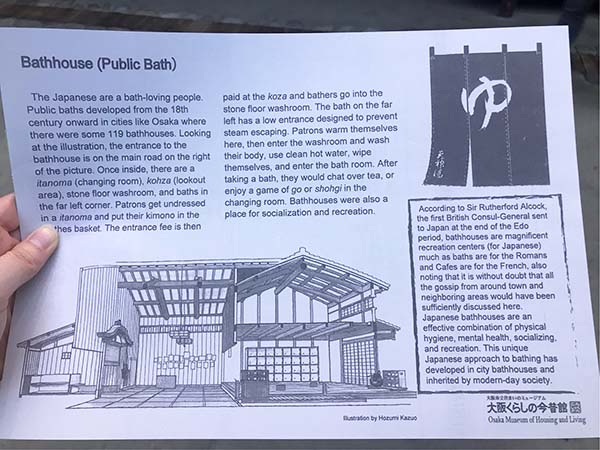 There are many foreign tourists, so there is also an English version. 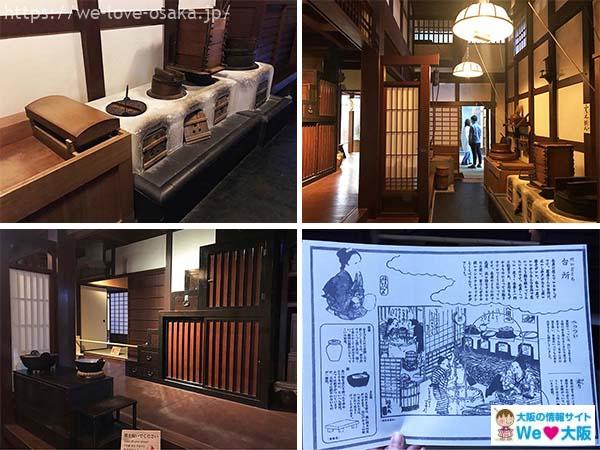 This is the kitchen. It is an atmosphere that seems to appear in historical drama. 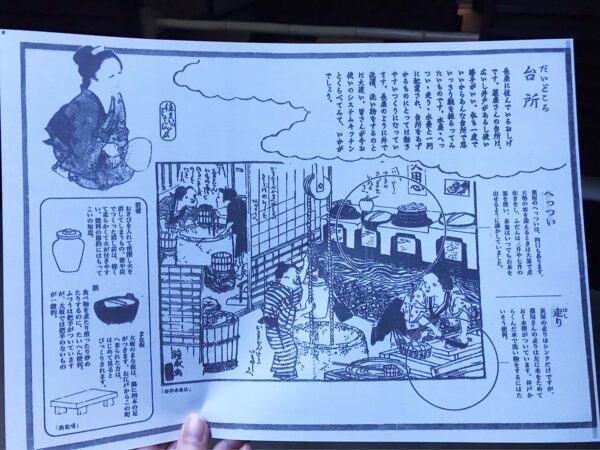 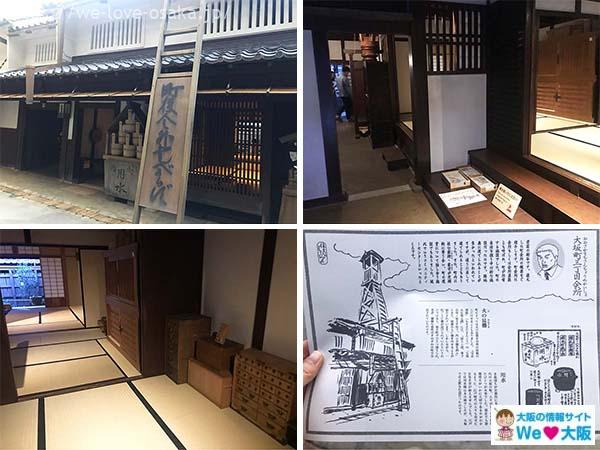 This is “Osaka Town 3-chome Kaisho”. A central facility responsible for the autonomy of the town at that time. It was also a facility where housekeepers living in the town gathered regularly to discuss the management of the town. 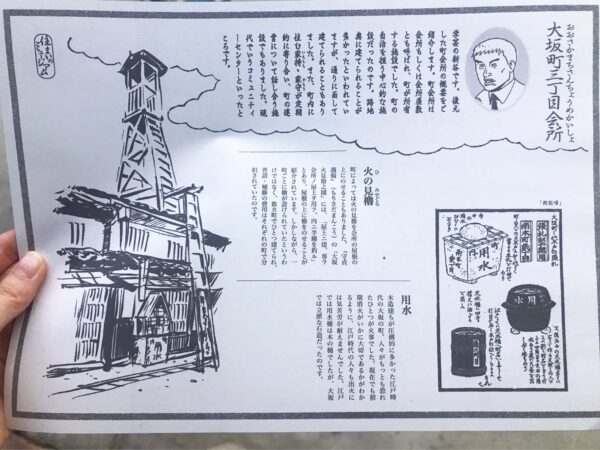 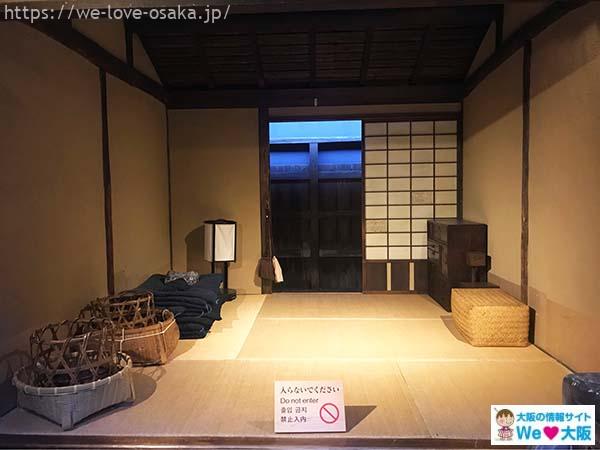 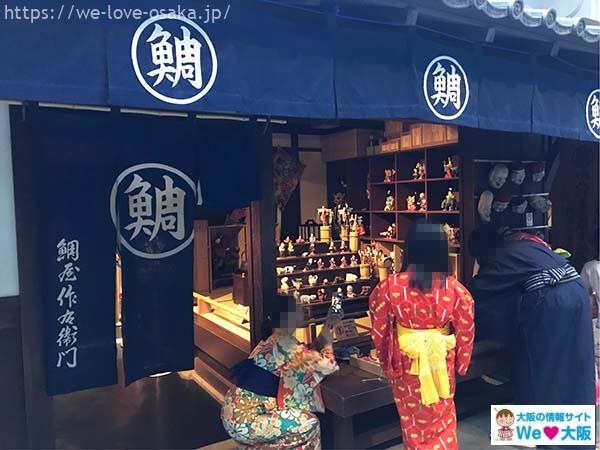 The back alley that recreates the residence of the time at narrow path. 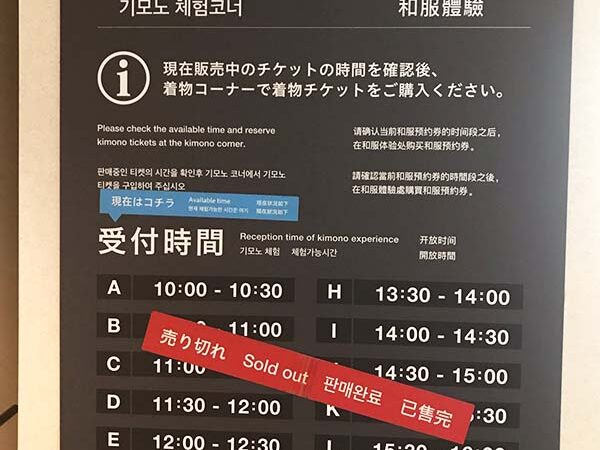 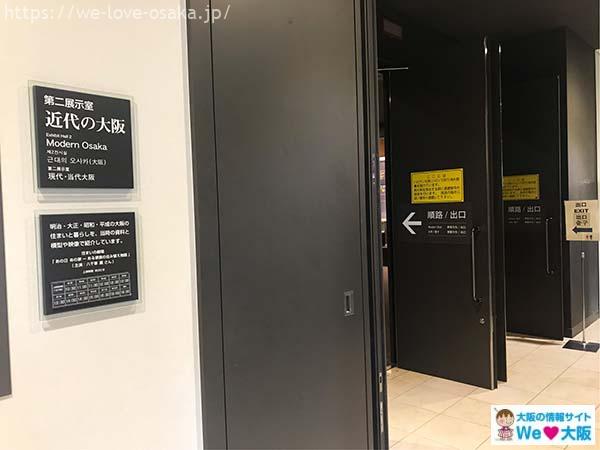 After seeing the streets of the Edo period, the typical housing and living of modern Osaka is reproduced with models and materials in the “Modern Osaka” area on the 8th floor, which is one level below. 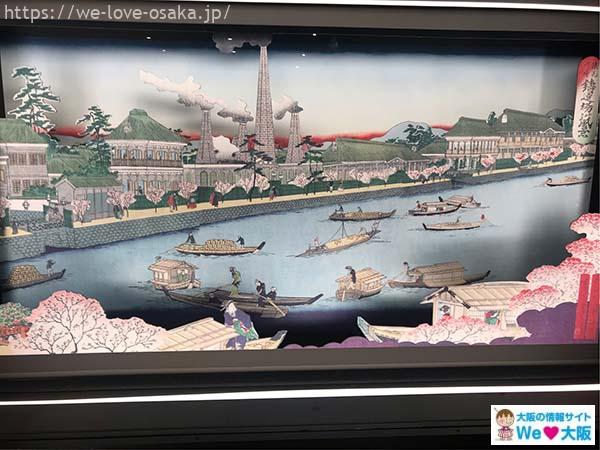 This is “Karakuri Nishiki-e”. Nishiki-e introduces the state of Osaka, which has begun to take a new path of development as a modern city. When you press the button, the explanation will start and the pictures will be added.
※Nishiki-e is the final form of ukiyo-e woodblock prints established in the Edo period, and it seems that many were drawn until the Meiji period.

This is a diorama of “Kawaguchi Settlement”. It is said that it was built at the ruins of the old shogunate’s bansho for foreigners to live with the opening of Osaka in the 4th year of Keio.
Buildings with Western-style designs such as balconies and glass windows with armor doors have been built to spread Western culture. 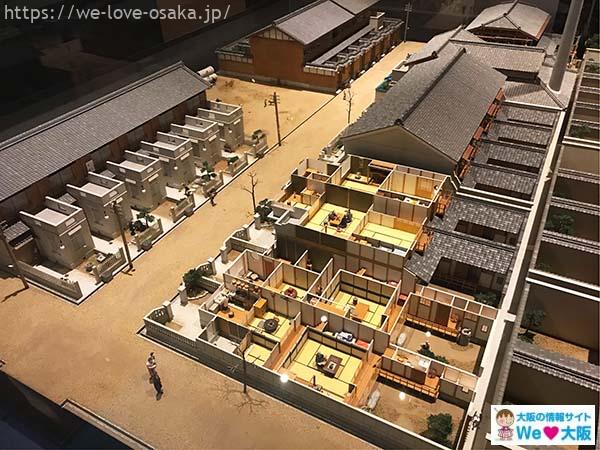 This is a diorama of “Kitasenba”. It is said that it was around the time when new style buildings such as three-story buildings, townhouses with large eaves called box eaves, and Western-style architecture appeared. 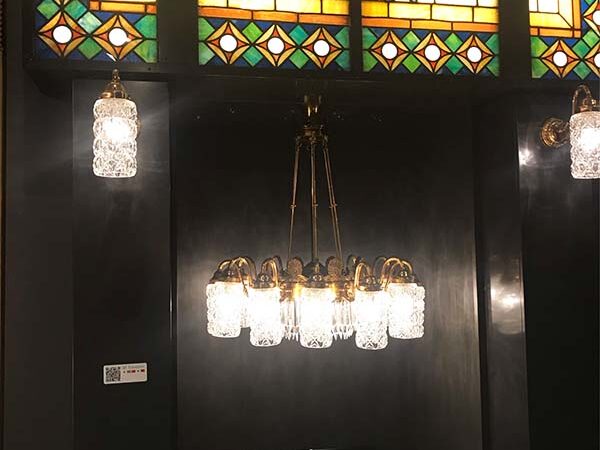 This is the stained glass and chandelier, which are the architectural heritage of the 3rd generation Osaka City Hall. The chandelier was installed in the mayor’s office. The stained glass is designed with the city emblem of Osaka City, “Mio Tsukushi”, in the center and laurels bundled with ribbons on both sides.

2. What is the highlight?

There are three highlights, the first is the Tenjin Matsuri diorama, the second is the Tsutenkaku diorama, and the third is the townscape restored from the Edo period. 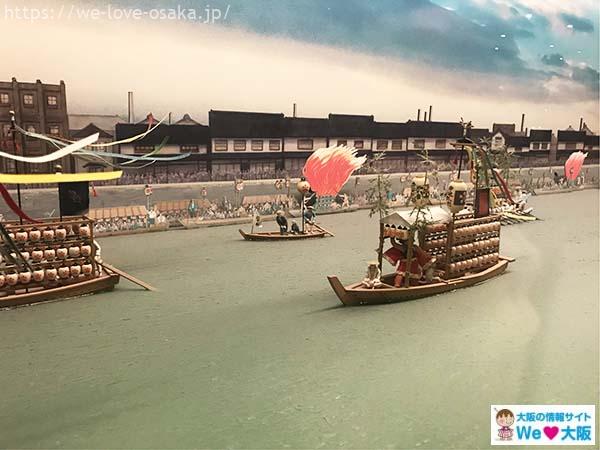 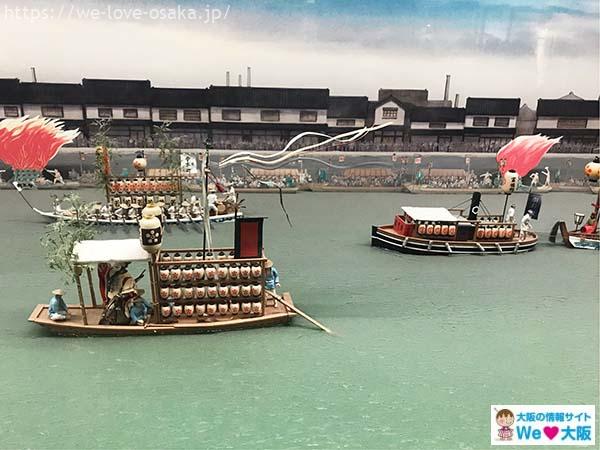 A diorama that reproduces the “Tenjin Matsuri”, the largest festival in Osaka.
This is a reproduction based on a picture scroll drawn in the 10th year of the Taisho era, and you can feel the atmosphere of the time from the person on the ship wearing a boater, the steamship, and the modern architecture built along the river.
Now, Tenjin Matsuri is famous for its night shops and fireworks, but at that time, you can see that these multiple ships were the main festivals. 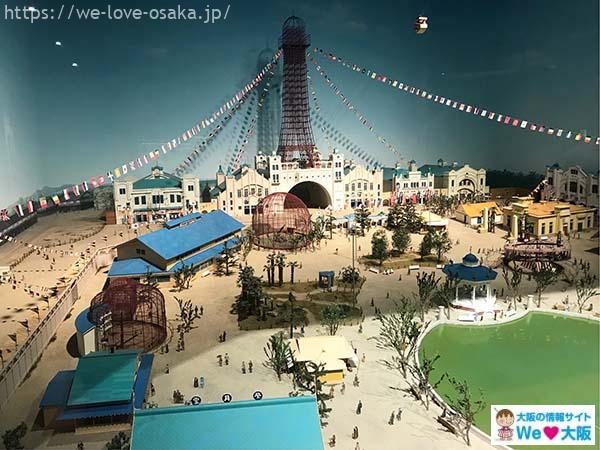 This is a diorama of “Tsutenkaku and Luna Park”. Tsutenkaku is a typical tourist spot in Osaka, but in the Meiji era, there was an amusement park called Luna Park at the foot of Tsutenkaku.
After the 5th National Industrial Exhibition was held in 1897, Osaka City set out a policy to make it an unprecedented wholesome entertainment area by using the site.
In response to this concept, it is said that a major entertainment area “New World” reminiscent of Paris and the United States was built around the symbol tower “Tsutenkaku” and the amusement park “Luna Park”.
This landscape is said to have reproduced the landscape at the time of opening.

As I have already introduced, this is a completely restored townscape of “Osaka”. Actually, this townscape has a special mechanism that the scenery of the sky changes during the time.
If you have time, you can enjoy the transition of the scenery.
Unfortunately, I was there from 3:30 pm to just before closing, but I couldn’t see any change!

What did you think.
We have introduced the Osaka Museum of Housing and Living.
When I actually visited, there were so many foreign tourists! That is a frank impression.
Approximately 90% are tourists from Asia, and the facilities inside the store are usually written in English, Korean, and Chinese, so I think that more foreign tourists are visiting than Japanese.
I feel a little lonely that foreigners are more interested in the history and culture of Osaka than Japanese people, but I am very happy to have them deeply understand the history and goodness of Osaka across countries.
I myself have lived in Osaka for five years, but I visited the Museum of Housing and Living and experienced the old lifestyle of Osaka for the first time.
Compared to the current Osaka, it has changed dramatically from the lifestyle at that time, and although it may have become more convenient due to technological development, there is an opportunity to experience a nostalgic and warm lifestyle somewhere in the past. I think it has decreased.
The Osaka Museum of Housing and Living is a museum where you can experience the lifestyle of Osaka, which evokes such nostalgic feelings, so if you are interested, please come and visit us.

※Click here for gourmet information around there

Cyun
I was born Kyoto and I live in Osaka . I love delicious food and I love eating.
Writer